The History of Tae Kwon Do

Tae Kwon Do is a martial art developed over 20 centuries ago in Korea.

The earliest records of its practice date back to 50BC where tomb paintings show men in fighting stances practising forms known as Taek Kyon.

It is believed that the origins of Taek Kyon date even further back and originated as self-defence against wild animals whose defensive and offensive movements were also the subject of much analysis. Taek Kyon, at the time was only one style of fighting. Others had names such as Subak, Tak Kyon and so on.

By 57 BC Korea had three kingdoms (Koguryo, Paekje and Silla) and, with a certain degree of inevitability, a strong rivalry amongst them led to the focus on the development of very effective fighting techniques.

History, repeatedly, has shown that it is the victor who writes the script and this case was no exception. Silla won its wars against its two rivals and in 668 AD it unified the three kingdoms.

Instrumental in its victory were the Hwa Rang Do, an elite group of young men who were devoted to cultivating their bodies and minds and serving the kingdom. Hwa Rang Do, quite literally, means flowering youth (Hwa=flower, Rang=young man) and the young noblemen of the Hwa Rang Do practised various forms of martial arts.

The Hwa Rang Do also developed an honour code and it is this which today forms the philosophical background of Tae Kwon Do.

In 936AD the Silla dynasty came to an end and with it the kingdom. In its place, Wang Kon founded the Koryo dynasty. Koryo is an abbreviation of Koguryo which Wang Kon sought to revive. The modern name Korea is derived directly from the word Koryo. It was during the Koryo that a new sport was given form. It was called Soo Bakh Do and it was used, principally, as a military training method.

Drawing from the many different forms of martial arts which had preceded it Soo Bakh Do used bare hands and feet as a weapon and its intensity was such that it was seen as a very good way of maintaining one’s strength and overall fitness. As a result its popularity spread throughout the kingdom of Koryo.

This was the precursor to modern day Tae Kwon Do.

Despite its effectiveness as a means of training for warfare however and its popularity with the peasants in the fields by 1492 it had almost disappeared. What happened was that King Taejo, founder of the Yi dynasty, replaced Buddhism with Confucianism as the state religion.

The teachings of Confucius, imported from the refined, rarefied culture of China, dictated that the higher class of man should read poetry and music and the practice of martial arts should be something left to the less refined, even inferior, man. The Yi dynasty lasted from 1392 to 1910 and during that time the practice of martial arts and the code of honour of the Hwa Rang remained alive in isolated, stubbornly traditional cultural backwaters of Korea.

In 1910 however Korea was invaded by Japan who dominated it until the end of World War II. The Japanese tried to erase all of the Korean culture including its martial arts. As is usual with such situations this brought a stubborn resurgence in the practice of martial arts which now, once more, had a very practical role to play against an invader who strictly controlled the supply of weapons.

Along with occupation, the Japanese also brought karate with them and indeed the quick, straight-line movements which characterise many Tae Kwon Do moves today are a direct result of the legacy left behind by the Japanese army of occupation. After the end of World War II, when Korea became independent, several Kwans, or fighting styles, arose. These were: Chung Do Kwan, Moo Duk Kwan, Yun Moo Kwan, Chang Moo Kwan, Oh Do Kwan, Ji Do Kwan, Chi Do Kwan and Song Moo Kwan. All these Kwans were united in 1955 under the name of Tae Soo Do.

Korea’s struggle to re-discover its identity and many traditions was, with some degree of inevitability, reflected in the subsequent development of its martial arts movement and by the beginning of 1957 several Korean martial arts masters had adopted the name Tae Kwon Do for their form of martial arts, because of its similarity to Tae Kyon. The very first Tae Kwon Do students were soldiers because General Choi Hong-Hi, who is credited as the father of modern Tae Kwon Do, required his soldiers to train in it.

General Choi Hong-Hi was president of the KTA at the time and he was asked to start the International Tae Kwon Do Federation (ITF) as the international branch of the KTA. What follows next is best described as the rise of the acronyms. In 1961, following the overthrow of the southern government of Korea general Choi left for the United States where he established the ITF as a separate entity, in 1963. Tae Kwon Do was introduced in the UK in 1967, just four years after the foundation of ITF. Six years later the World Tae Kwon Do Federation (WTF) was founded and in 1980 it was recognised by theInternational Olympic Comite (IOC) which made it a demonstration sport in the Olympic Games. 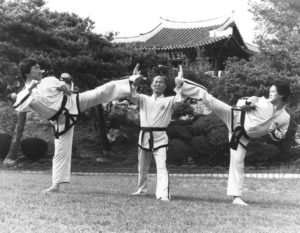 Five years later, in April 1988, the TAGB became a founding member of the British Tae Kwon Do Council (BTC). The BTC is the only body recognised by the United Kingdom Sports Council and it incorporates 15 different organisations. The birth of the TAGB and the formation of the BTC represent a happy chapter in the tumultuous history of Tae Kwon Do. With the power of hindsight it is easy to make light of the differences of organisations which have more in common than not. It would, however, be also proper to reflect that the birth of Tae Kwon Do, its development and its propagation are as much a mirror of its troubled origin and the practical needs which made it possible as they are a telling remark on the apparent inability of its many governing bodies to cast aside their differences and find some common ground. The TAGB, with over 25,000 members represents the next stage in the development of Tae Kwon Do. With its grounding in the ethos and tenets which were first espoused by the Hwa Rang over 2,000 years ago and its open acceptance and constant development of forms, training techniques and ideas, it stands poised to take an ancient fighting form into the 21st century, successfully linking the distant past with an equally distant, and certainly no less wondrous, future. In view of this, in 1993, a new world body was formed called Tae Kwon Do International. The new body encompasses both ITF and WTF stylists, it is entirely non-political in orientation and its sole aim is to promote the benefits of Tae Kwon Do as a sport and as a martial art, worldwide. The TAGB is a founding member of this new body.

Cristian loves it! He says the instructors are great and it's good to be part of a team. He enjoys learning the Korean numbers and is really focused on gaining his first belt.

I like Tae Kwon-Do because it improves my focus and concentration, which helps me at school. The instructors are really nice too.

I think Mr and Mrs Russell are fantastic instructors. They really know how to bring the best out of their students.

Since I started coming to Lytham TKD I have started to get slimmer and more confident.

If you are reading this and are daunted at the prospect of going to a martial arts class for the first time, I would encourage you to come along....you will soon discover that you are amongst friends.

My daughter is aged 6 1/2 years. When I first mentioned Lytham TKD to her she was very interested. She didn't know what to expect (neither did I!) but from the very first session, she was welcomed like a member of the family. She continues - 3 months on with the same enthusiasm - she loves it! She has already passed her 1st grading. The instructors and helpers are excellent and very knowledgeable.

Only my third lesson but i'm addicted! Great group of people.

I joined Lytham TKD to get fitter as well as learn self defence. Thoroughly enjoyed it although my legs will not thank me tomorrow after all that exercise.

Having never done martial arts before I gave Lytham TKD a go. Mr & Mrs Russell made me feel at ease straight away and everyone was friendly. Really enjoyed it and looking forward to my next class.

This message is only visible to admins.
Problem displaying Facebook posts.
Click to show error
Error: Server configuration issue
Back To Top
×